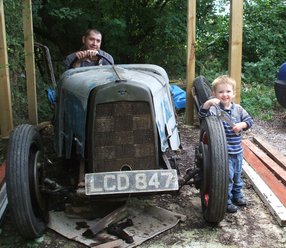 Are we there yet !    Nearly finished! 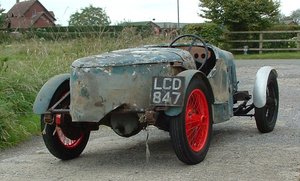 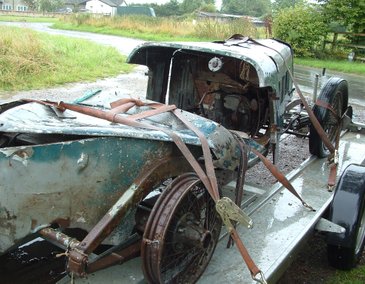 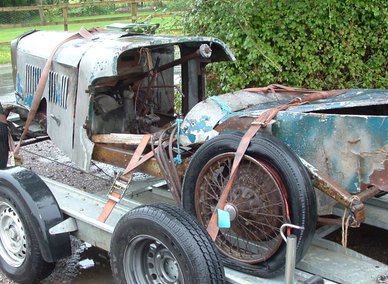 Having competed at Prescott Hill climb with pit crew, my lad David, a new interest was kindled in the boy and utterances about collecting some bits were heard. Knowing how younger folk struggle, from my own life alone, with finding any spare cash I decided to surprise him with “something”.

Having asked around, I was given a tip off about a special languishing in a back garden in Sandhurst, I made contact and arranged a visit  to look at it. Took trailer anyway to save any extra diesel.  August Bank holiday Monday was chosen and I duly set off, travelling in hope!

What I found was not a disappointment, I had been emailed pictures before going.  A complete wreck was sitting under some plastic sheets.  It was a damp drizzly early morning and the seller helped unearth the beast.  He was an “old car” enthusiast who was always on the lookout for old cars, and a friend had tipped him off about this one in Wembly.  The “Old” guy had said it was a Brooklands , aren't they all?, and that his father had competed in it during the fifties.  Luckily the seller now knew it wasn't what he had hoped when he got it....still had high hopes of it's value.  Luckily he had been offered a low bid before, still a King's ransom by Riley owner's standards, and I was able to prise it from him for what I could allow myself to pay. ( Still tooooo much.)

Being bank holiday, should have known, the skies decided to do what one would expect and the heavens opened up just as the deal was done. No wet weather gear, so ended up soaked to skin by the time we managed to persuade the unwilling beast out of hiding.

When I got home I rang David and asked for his help to unload the pile of bits I had just won. He arrived and was duly impressed with the wreckage, a grin from ear to ear appeared when informed it was to be his to race when finished.

There were no documents, and a strange number was on the pressed number plates in the pile. I had been told the “Old guy” had shown the buyer a room packed to the gunwales with boxes and “that the log book was in there”,  whether that will ever surface is to be seen, but a letter has been sent.

Gordon Ager kindly informed me what was known of the car, that number and chassis number were logged in by a one year member a few years back.  A 1950's date was also given and Gordon suggested I contact East Sussex records office to see if they could help, a same day reply to my email confirmed they could....The Registration number “was allocated to Thomas Melvyn Jeremiah, 2 Adelaide Mansions, Kingsway, Hove for a Riley ‘built up vehicle’ on 7 Jul 1951”  So now for the an attempt to joint the number back on......just need to make the beast look presentable and we can try.

( No Saloons have been harmed in this special's creation ) 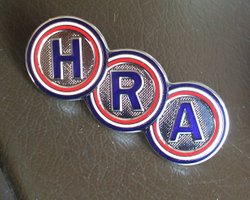 An early dropped chassis with the silent 3rd box 1932.  Had a bit of a life as seen in pictures as found.

Will be bodied by Brooklands Bodycraft with pointed tail and outside exhaust as it is on a 7ft 6inch wheel base.......  Watch this space.